Description:When reviving damage, set off a series of flaming fireworks that engulf the enemy. Enemies in drunken status will revive extra burning damage. 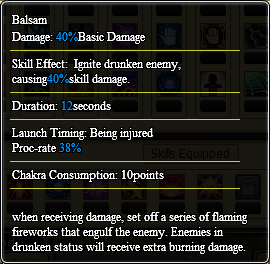 Note: When combined with Bloodboil, Balsam has the ability to repeat due to the damage received with each cast. However, if the first Balsam results in an enemy Block, Dodge, or Pet Block, each subsequent Balsam will also trigger the same result.

Community content is available under CC-BY-SA unless otherwise noted.