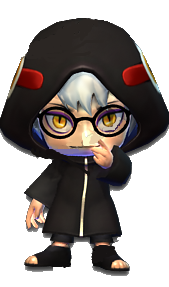 Kabuto Yakushi (薬師カブト) was a former personal healer and right-hand man of Orochimaru. After injecting the DNA of his master and becoming stronger he teamed up with Madara in the war.

(To Itachi and Sasuke) "As I recall, you two hated each other, leading to your death. Now you plan to destroy me and end the Reanimation Jutsu by fighting side by side? Heheheh...Bow down to the power of a Sage! I am perfection itself!"

The game sprite is the form of transformed Kabuto, with the injected DNA of Orochimaru. His skin has a scaly look to it, and the eyes have turned a shade of yellow. He still keeps the signature glasses, and same color hair. In this form, a cloak is worn over his skin, very different to his usual purple clothing.

In the Manga and Anime, Kabuto is an antagonist that makes his debut in the Forest of Death, Chunin Exams Arc. He soon becomes an accomplice of Team 7, though later it is shown that it was just a ruse to get closer to Sasuke, find out the information for Orochimaru, who he is the assistant and accomplice of.


Kabuto is seen the next time during the final battles of the Chunin Exams, and the Healer quickly manages to just disguise himself as an ANBU, and heals Hinata Hyūga during the match between Naruto Uzumaki and Neji Hyūga. The Ninja manages to then put the audience to sleep with his jutsu, effectively helping to begin Invasion of Konoha. He, however, does not contribute to the battle from then on, meerly staying and watching through the whole invasion, fleeing from the troops once they realise that they failed the invasion.

Kabuo later assists the Sannin, Orochimaru in the process of healing his damaged body, where they proceed to look for Tsunade in the hopes that she will help to heal her former team-mate. When she agrees to help, Kabuto watches on as the female proceeds to gather chakra to heal, though realising she was trying to kill Orochimaru, he soon starts engaging in a battle with the other Healer. Kabuto is shown to try to boost his fighting skills with a Military Rations Pill, and later realising he is still no match for the great Sannin. When he, however, is hit with a blow that manages to make him be at a great disadvantage, he cuts his hand and approaches Tsunade, scaring her greatly, causing her to lose all her concentration, and losing her the battle. He later fights the reinforcements, including Shizune, and is shown to beat her with ease. He fights Naruto at the end, however being greatly injured, and is unable to heal himself. He flee both the battle and then scene, helping Orochimaru to summon Manda before fleeing with Orochimaru the second the latter loses.

Retrieved from "https://pockieninja.fandom.com/wiki/Kabuto?oldid=15031"
Community content is available under CC-BY-SA unless otherwise noted.