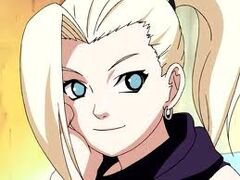 Ino Yamanaka is a chunin-level Kunoichi of Konogakure, and a character of Naruto. She specialises in the Mind-techniques, being from the Yamanaka Clan, and she's part of the Ino-Shika-Cho team. Anime/Manga: Naruto

During time in the Academy, Ino was considerably more popular and self-confident than Sakura Haruno when they met. She convinced Sakura that hiding the size of her forehead was pointless, saying that it only made her look worse. Ino gave Sakura a red ribbon to draw attention elsewhere, suggesting that Sakura had great potential, but had yet to reach it. This had lead to ongoing arguments about Sakura's "Billboard Brow" and Ino's nickname "Ino-pig" (due to her name, Ino, meaning 'boar'). Despite all these arguments, she helped Sakura gain her confidence. When Sakura became attracted to Sasuke, and found out that Ino was attracted to him as well, Sakura ended their friendship hurting Ino in the process so she could compete with Ino for his affection. Ino later decided to and made friends with Sakura again during the Chūnin Exams, but they are still considered rivals by many.

Retrieved from "https://pockieninja.fandom.com/wiki/Yamanaka_Ino_(Anime)?oldid=14506"
Community content is available under CC-BY-SA unless otherwise noted.